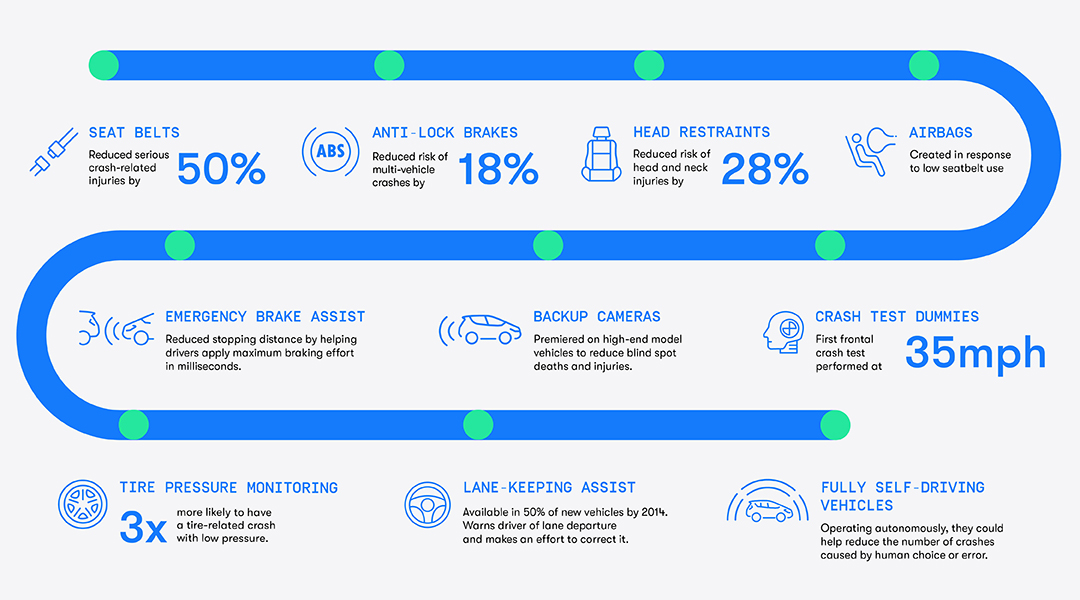 June is National Safety Month, an important time to continue the dialogue about road safety, how far we’ve come, and where we are going.

It has been over 100 years since the first recorded traffic fatality occurred in the United States. Since then, the tally of preventable deaths on our nation’s highways has tragically soared to about 40,000 deaths per year, according to the National Safety Council (NSC). Sadly, most of those deaths are preventable and caused by distraction, impairment, fatigue, and excessive speed.

And while the unfortunate number of fatalities remains unacceptably high, much progress has also been made. Engineers, vehicle manufacturers, agencies, and organizations have worked tirelessly to move the needle on making driving safer.

In chronological order, here are 10 technological advances that have made vehicles safer, plus a glimpse at the most recent innovation in road safety that could change the way we think about driving forever.

The year 1958 was pivotal in the evolution of road safety when Volvo introduced the seat belt. However, it wasn’t until 1966 that Congress mandated the installation of seat belts in all vehicles – the same year, the National Highway Traffic Safety Administration (NHTSA) was established. In 1984, New York passed the first state law requiring seat belt use in passenger cars. A recent study by the CDC concluded that seat belts reduce serious crash-related injuries by half.

The year 1966 saw the introduction of anti-lock brakes (ABS). Based on aircraft technology and successfully commercialized by Chrysler in 1971, ABS prevents wheels from locking during braking. The result is more improved vehicle control and decreased stopping distances. Studies show that ABS can reduce the risk of multi-vehicle crashes by 18% and off-road crashes by 35%. This innovation also created the foundation for electronic stability control (ESC), a new safety technology which can quickly detect dangerous situations and adjust braking of individual wheels to prevent a vehicle from spinning out of control. ESC is required in all light passenger vehicles manufactured since 2012.

Also known as headrests, head restraints can reduce the risk of whiplash or other neck and head injury during a crash by roughly 28.3% when used correctly. Although an early patent was first granted to Benjamin Katz in 1923, government regulations did not touch on head restraints until 1967 with height rules for headrests in vehicles purchased by the U.S. government. The Federal Motor Vehicle Safety Standard No. 202 became effective, requiring headrests of a specific height in all new vehicles in 1969.

In the early 1970s, seat belt usage was still quite low. In response, Ford introduced airbags as an alternative restraint system in a fleet of experimental cars. After extensive research and several deaths, the auto industry moved away from this position and, in 1981, Mercedes-Benz introduced the air bag as a “supplemental restraint system” rather than a seat belt alternative.

In 1978, the first 35 mph frontal crash test was administered. The goal was simple: to ensure safe design standards. In 1985, crash test dummies became an integral part of testing as well as safety education. To promote seat belt use, NHTSA introduced Vince and Larry, the Crash Test Dummies accompanied by the tagline “You Could Learn a Lot from a Dummy.”

In an effort to reduce the number of deaths and injuries that occur in blind zones, automakers began rolling out the first backup cameras on high-end model vehicles in the early 2000s. They are now required in all new vehicles. Backup cameras enable drivers to use a screen in the dash to view what is behind the vehicle while in reverse.

For drivers, reaction times to engage braking in the case of an impending emergency can be slower than necessary to avoid a collision. Enter emergency brake assist (EBA), also called dynamic brake support (DBS), in the mid-90s. If the system detects that a driver is trying to apply the brakes, EBA quickly activates to help the driver apply maximum braking effort in milliseconds and can dramatically reduce stopping distances. Taking things a step further, automatic emergency braking (AEB), leverages data from sensors to apply brakes automatically in situations when a forward collision may be imminent. The technology evolved into radar-assisted, pre-collision warning systems, also called forward-collision warning systems. It’s important to note that, while advanced, these features do require an active, alert, and fully-engaged human driver who is not tailgating and always maintains at least a three-second following distance.

Low tire pressure can lead to faster wear and tear of tires and even cause a tire blowout. A study by the National Highway Traffic Safety Administration found that vehicles driving with low tire pressure were three times more likely to be involved in a tire-related crash than vehicles with tires properly inflated. In 2008, tire pressure monitoring systems became required on all vehicles in the U.S.

9.  Lane-keeping assistance and other driver-assist features

Driver error, distractions, and drowsiness remain leading causes of collisions. Today’s lane-keeping assist features warn the driver if a vehicle departs a lane and automatically takes steps to ensure the vehicle stays in the lane. Lane-keeping assistance builds on the lane-departure warning feature, which was available in 50% of vehicles by 2014 according to AAA. Lane-keeping assist is often combined with adaptive cruise control and other Advanced Driver Assistance Systems (ADAS) features to create a partially automated vehicle.

It’s important to remember that while partially automated vehicles and vehicles with driver-assist features represent important steps forward for safety, they still need a fully alert and constantly attentive human driver to operate.

A key characteristic of this timeline is that each innovation focuses on crash mitigation, but a major shift is happening in the future of road safety. Fully self-driving technology could prevent many crashes from happening in the first place. Fully self-driving vehicles are different from those with driver assist features because they are designed to operate autonomously, without the need for a human driver.

Since 2009, Waymo vehicles have been navigating real city streets and driven more than 20 million miles on public roads in more than 25 cities. Fully self-driving vehicles, like Waymo’s, are taking the next step to advance automotive safety technology and have the potential to reduce the 40,000 deaths per year caused by human-driven car crashes. 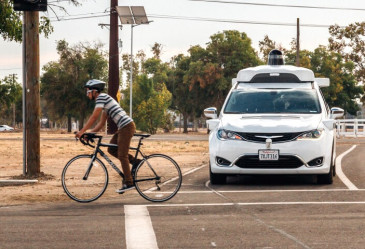 According to the National Highway Traffic Safety Administration, 857 bicyclists were killed in traffic crashes in the United States in 2018. June is National Safety Month and an important time to consider how we can create a safer future for cyclists. 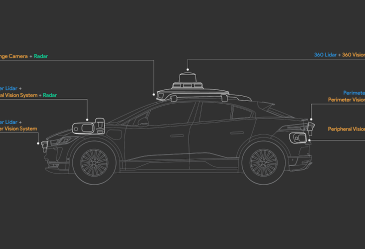 As fully self-driving cars become a more common sight on America’s roadways, you’re probably curious about what that means for road safety. We’ve answered your top questions about fully self-driving cars, in addition to compiling the helpful research you need to feel better informed about this new technology.

Reshaping the transportation landscape for people who are blind